The garden is located in lively area and covers 250 square meters. There are some renowned Japanese artworks: Torii Gate, Golden Gate (one of the symbols of Japanese beauty), Tasoutou style stone tower (sculpture for happiness and good fortune), Kasuga style stone lantern and traditional Japanese Golden Bridge. A Sculpture of the Mountain Fuji and specially imported peace of lava from the Fujisan Volcano are irreplaceable parts of the garden.

The Mayor of Tbilisi Mr. David Narmania, the Ambassador Extraordinary and Plenipotentiary of Japan Mr. Toshio Kaitani, Deputies of the Mayor of Tbilisi as well as the Head of the Municipal Department of Environment and Landscaping attended the opening ceremony. Traditional Japanese tea ritual was arranged in the garden.

It is noteworthy, that opening ceremony of “Japanese Garden” was organized on the international tree-planting day. The Mayor together with guests planted five new 2-meter tall Sycamores.  Also in the “Japanese Garden”, verities of different and interesting ligneous plants were seeded, such as maple, pine-tree, cypress, spruce, rhododendron and different types of sakura (Japanese Cherry Blossom) bushes.  The garden was established in accordance with all principals of Japanese garden. The project is owned and implemented under management of Japanese company “Kosugi”.

Mr. David Narmania noted, that, in the scope of Environment and Landscaping Municipal Department’s program, activities for improving green cover will intensify from next week and additional 80 000 new trees will be planted in Tbilisi during the Autumn season.

“One more new and beautiful open space -“Japanese Garden” was added to our City. We all know that Japanese garden is one of the fundamental symbols of Japanese culture. Their art of gardening with its ancient and spiritual characteristics is renown in the world, which attracts countless visitors form around the globe. We are delighted, that after extensive works “Japanese Garden” was established in Tbilisi, namely in the Georgian National Botanical Garden. I am certain it will became one of the favorite places for our citizens and the visitors” – stated Mr. David Narmania.

“Japanese Garden” was built in the Georgian National Botanical Garden with efforts of the Embassy of Japan and Tbilisi City Hall and support of JAPAN EXPO’70 FUND and JTI Company. It is dedicated to the friendship between Georgia and Japan. 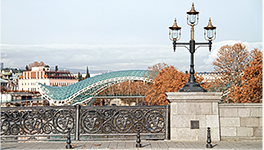